In Florence, We'll drive you!

Include: Duomo, Academy (David Michelangelo) - Medici Chapels, Church of San Miniato a Monte, Piazzale Michelangelo, Santa Croce
If you don't have much time in Florence we can arrange for a half day tour and show you the highlights of this beautiful Renaissance city in perfect comfort and luxury. 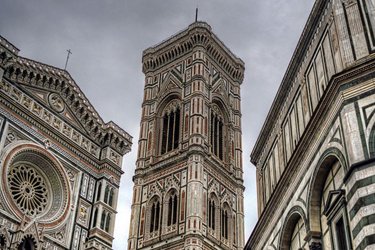 Brunelleschi's Dome dominates Florence and even today there is no taller building in the whole city. The bell tower was designed by Giotto even if he did not see it finished. The Baptistery is one of the oldest buildings in Florence and has been there since the 4th century.A cathedral of 153 meters in length, built in almost 170 years to envy the churches of the rivals Pisa and Siena. The most important Florentine artists took part in the realization of this complex: from Giotto to Brunelleschi, from Vasari to Talenti, from Arnolfo di Cambio to Lorenzo Ghiberti. 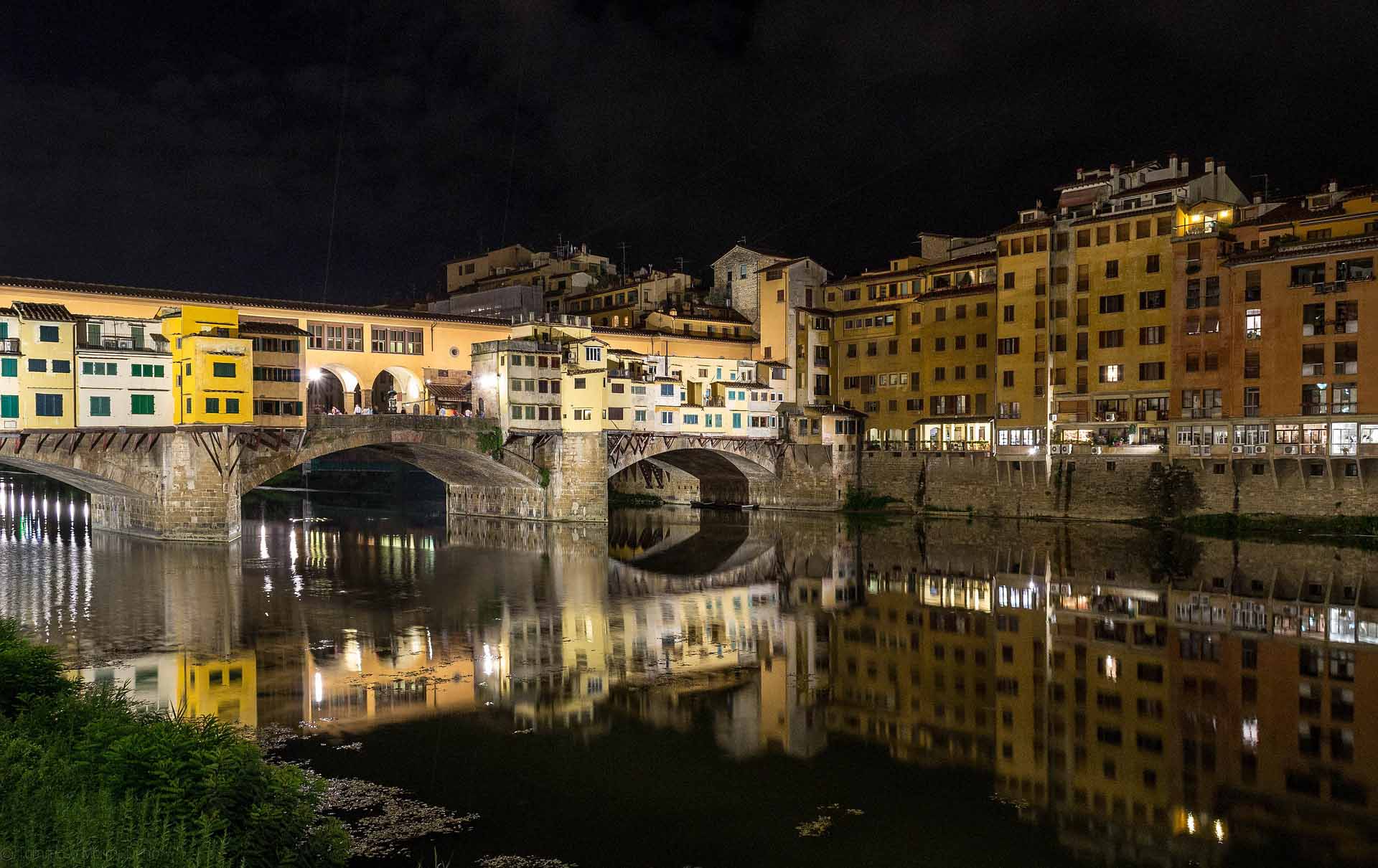 Pontevecchio is the most beautiful bridge in Florence and one of the most photographed in the world, has not always been a chic place. Even though today the goldsmiths' shops are attracting caravans of tourists, until 1565 the shops of the vegetables and butchers dominated the bridge. In 1565 Giorgio Vasari built the Vasari Corridor for Cosimo I Dè Medici to unite Palazzo Vecchio, with Palazzo Pitti (then the Medici's private residence). The corridor, about one kilometer long, starts from Palazzo Vecchio, passing through the Uffizi Gallery, then over the Ponte Vecchio shops and then continuing up to Palazzo Pitti. It seems that Hitler gave the order to save Ponte Vecchio during the bombings of the Second World War. Sometimes beauty also illuminates tyrants. 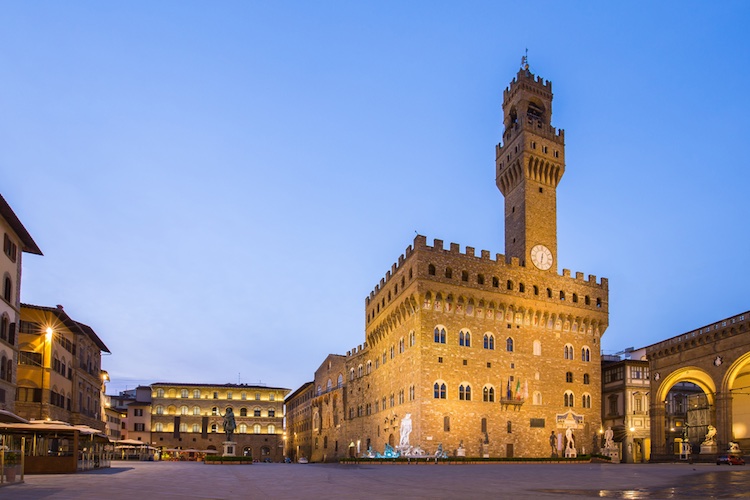 The first striking thing about Palazzo Vecchio in Florenceis the impossibility of photographing it in its entirety. It's too big and too tall to get it into one picture.It is considered the best example of fourteenth century civil architecture in the world. The one that prevents him from returning all in one click is the "Torre di Arnolfo", 94 meters high and built around 1310, which brings the great flag with the Florentine lily to the summit. At the entrance to the Palazzo Vecchio, a copy of Michelangelo's David shows off (and pigeon support). It is Piazza della Signoria to host this beautiful palace, a place that for a long time has been considered "cursed", because it is a battleground between Guelphs and Ghibellines. Once the footsteps of a bloody past have been erased, Piazza della Signoria is now the center of social, civic and political life of all the citizens of Florence. 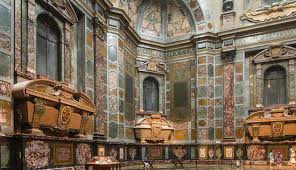 The Medici Chapels (Cappelle medicee) are two structures at the Basilica of San Lorenzo, Florence, Italy, dating from the 16th and 17th centuries, and built as extensions to Brunelleschi's 15th-century church, with the purpose of celebrating the Medici family, patrons of the church and Grand Dukes of Tuscany. The Sagrestia Nuova ("New Sacristy") was designed by Michelangelo. The larger Cappella dei Principi ("Chapel of the Princes"), though proposed in the 16th century, was not begun until the early 17th century, its design being a collaboration between the family and architects.The dome of the Cappella dei Principi dominates the San Lorenzo architectural complex. 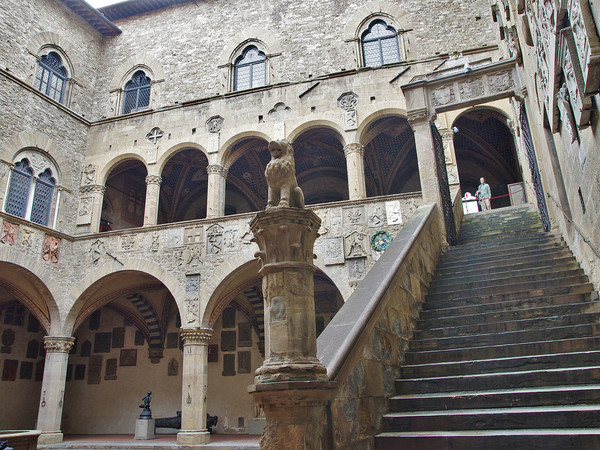 The National Museum of Bargello has its setting in one of the oldest buildings in Florence that dates back to 1255. The large 14th century hall on the first floor displays some works by Donatello (1386-1466) including the early marble David, the St. George moved to this location from the niche in Orsammichele, the more mature and ambiguous bronze David, the Atys. and the Marzocco, originally installed on the battlements of Palazzo Vecchio. The works of the master are surrounded by the most delicate works of his pupils Desiderio da Settignano (c. 1430-1464) and Antonio Rossellino (c. 1427-1479). The collection also includes the two panels entered by Lorenzo Ghiberti and Filippo Brunelleschi for the Baptistery door competition of 1401. 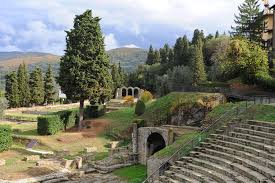 Fiesole In the IV century, was one of the biggest cities of Etruscan, much earlier than the Romans conquered Italy. It was gradually absorbed by the Romans who highly considered the Etruscan civilization because of its refined culture and developed economy. Fiesole is traditionally considered the “mother of Florence”. Thanks to its richness and importance, Fiesole was defeated by Florence in 1125. It became the favorite place of the rich Florentine families (like the Medici) for building country villas. From the end of the XVIII century, Fiesole became one of the preferred places in Italy for foreign nobles. They bought here huge mansions with big amazing gardens. Fiesole was the shelter for poets and artists, who were inspired by its beauty. Among them the Renaissance artists Beato Angelico and Mino da Fiesole, and in the XX century, the painter Arnold Böcklin, the English collector Sir John Temple Leader, and the American architect Frank Lloyd Wright.

The proposed itineraries are only examples of possible tours. For customized itineraries we invite our clients to contact us and design their own tour.